On last night's Halloween-themed SNL, things got a bit weird.

Iggy Azalea can now officially be crowned a pop queen, after her SNL debut last night. I-G-G-Y performed three songs – she kicked things off with the monster hit Fancy and later on, brought out Rita Ora for their girl power-themed collab, Black Widow. For Iggy fans, it was kind of a dream come, as Iggy rapped, sung and gyrated her way through the two breakout hits of Summer ’14 alongside her band of dancers, all decked out in hot pants and letterman jackets. 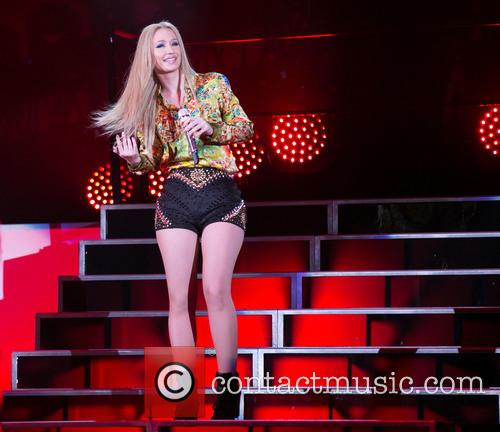 Iggy Azalea had her SNL debut last night. Let's talk about it.

Now, I’ll be blunt here – Rita Ora’s appearance looked just a little bit awkward, as the two stars were apparently instructed to make things a little more sexual, but neither one seemed really into it.

All that was forgotten, however, when I-G-G-Y took the stage for a second time to perform her new single Beg For It with Danish singer MØ. Baring only a slight musical resemblance to Fancy, the track definitely has some Billboard potential – and the performance was much more seamless this time around. Unfortunately, not everyone was a fan. Here's a sample of the reactions on Twitter:

This week's SNL musical guest was Iggy Azalea. Next week's is Prince. That's like Vanilla Ice opening up for Biggie Smalls, Run DMC AND 2Pac

You know what happens when you're singing and two microphones come together? FEEDBACK! Sorry Iggy Azalea, we're onto your game. #SNL

Ouch. Iggy Iggs also did a skit alongside Jim Carrie, but we’ll skip over that one in the name of taste and decency.