Iggy Azalea and Rita Ora come together in the new single 'Black Widow', to bring us a song about a failed relationship that causes the titular black widow personality to come out and avenge said relationship. But is this pairing a match made in heaven, or will it go on to stain these artists' careers? 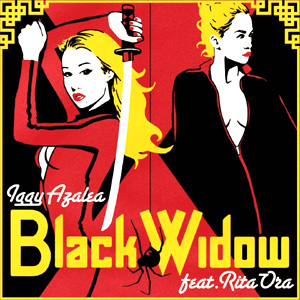 Australian rapper Iggy Azalea and British singer Rita Ora both adopt different accents (and vocal pitch, in Azalea's case) in their career, so it makes sense that these two 'acts' are combining for what amounts to little more than an imitation performance of soulless hip-hop and pop music. Incidentally, the accompanying music video is an upsettingly awkward rip-off of 'Kill Bill', even down to Michael Madson's unfortunate inclusion.

The hook is sung by Rita Ora and, thankfully, plays out as the most bearable part of the whole track. Her voice introduces real heart into the otherwise desolate wasteland of this single - supposedly where creativity went to die. However, despite her voice, the hook is totally forgettable. Written by Stargate (Tor Erik Hermansen and Mikkel Storleer Eriksen), Benjamin Levin, Katy Perry, Sarah Hudson and Azalea, the lyrics are repetitious and the beat sounds bleak and empty.

'Black Widow' tries to boost the 'bad girl' image of Iggy Azalea to breaking point. While it isn't as painful as her collaborative effort with Charli XCX, 'Fancy', Azalea still crams words awkwardly together in complete disregard for pace or timing. Half of the time she fails to rhyme, but more often than not, she simply ends multiple sentences with the same word as a substitute for creativity. She throws aside her Australian accent in favour of a poor Nicki Minaj impression.

'Black Widow' is a drab and dreary hip-hop track, occasionally lifted by the audibly satisfying hook. It shows off why Azalea's debut album received such moderate and non-committed critical reception, because the track lacks the sound of any effort and therefore bears no reason for discussion.