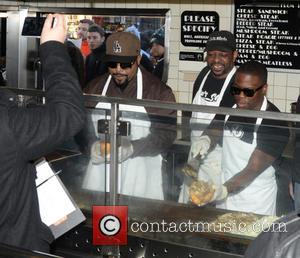 Rapper/actor Ice Cube has dismissed Justin Bieber's behaviour as the antics of a spoilt celebrity which can not be compared with the provocative statements made by his former group N.W.A.

The American rap collective became notorious in the 1980s for their outspoken and unflinching views on society and authority, prompting comparisons to punk pioneers such as the Sex Pistols.

The F**k Tha Police rapper admits there are ever-more provocative figures appearing in music, but he insists Bieber is not one of them and dismisses his recent bad behaviour as trivial.

The hip-hop star tells ShortList magazine, "That's a different kind of crazy. That's being a young, rock 'n' roll rich kid who's able to do whatever he wants. Just because somebody's a f**k-up, doesn't mean they're provocative. We didn't make music to shock; we did it because it felt right. It was a release valve for us."

Bieber was arrested in Miami, Florida in January (14) on suspicion of driving under the influence, and is also facing charges relating to the alleged assault of a chauffeur in Canada. His California mansion was raided by police in January (14) following allegations that the singer damaged a neighbour's house by pelting it with eggs.