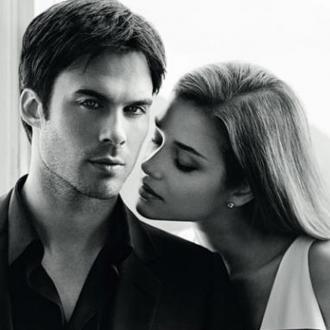 'The Vampire Diaries' hunk shared his debut campaign for the men's fragrance with eager fans on his Instagram account, teasing photos from the ''amazing'' shoot as well as linking to the video for the French luxury brand.

He excitedly wrote: ''Here it is! I think this came out pretty awesome...An AMAZING experience for sure! Follow my adventures through the sumptuous villa at Lake Como w/ the dazzling Ana Beatriz Barros for @Azzaro_Official Pour Homme #AzzaroPourHomme Thank you!''

The sizzlingly hot ad was shot in Italy last July and Ian was joined by model Ana Beatriz Barros, who has walked for Victoria's Secret and starred in the Sports Illustrated Swimsuit issue.

The 35-year-old star, famed for playing bad boy vampire Damon Salvatore opposite his ex-girlfriend Nina Dobrev in hit TV show 'The Vampire Diaries', was announced as the new face of Azzaro's scent earlier this month.

He took over the gig from Latin pin-up Enrique Iglesias, who was previously the face of the fragrance, which symbolises ''pure seduction, the symbol of eternal masculinity''.

Ian commented on the Azzaro Facebook page: ''I think that when a man wears fragrance, he instinctively knows that this is above all for the benefit of others. The intention of seduction is always there.''