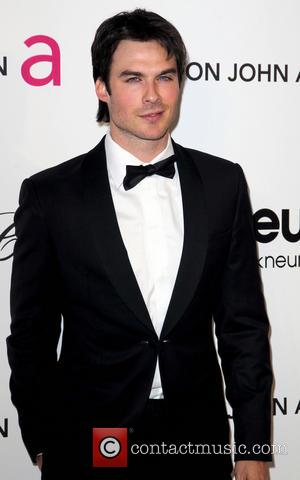 Actor Ian Somerhalder has teamed up with make-up artist Josie Maran to raise funds to build an animal sanctuary.

The Vampire Diaries hunk has been named as Josie Maran Cosmetics' Model Citizen for 2013 in recognition of his extensive charity work, and they have joined forces to release a special line of products with 10 per cent of proceeds being donated to his Ian Somerhalder Foundation.

In a special video announcement, Maran says, "I started the model citizen campaign to really prove that doing good is a beautiful thing, and get people inspired to do something in their community. Ian isn't just a good actor, he's doing really beautiful acts in the world. He has a huge heart and a lot of energy and power to really change the world."

Somerhalder also featured in the video and revealed that he's working on plans to launch his own sanctuary for abused animals.

He explained, "One of the many projects, which this will help in great part, is we're building an animal sanctuary that's also going to double as a sustainable agriculture farm and triple as a youth education camp. When a young person comes to that farm, they leave with a different understanding of compassion. If you have compassion for an animal, ultimately you will have compassion for people."

Somerhalder has yet to reveal where he wants to establish the animal sanctuary, but fans can also donate to the cause directly via his foundation's website.