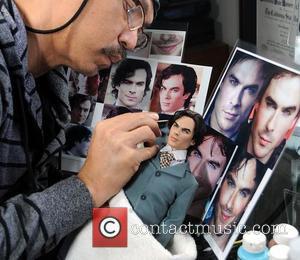 Picture: Ian Somerhalder and Noel Cruz - Accomplishing this feat requires many photos of the famous person/character, plenty of time, and a great deal of skill......

The Vampire Diaries star Ian Somerhalder is set to officially open an animal sanctuary in his native Louisiana almost four years after announcing the initiative.

The avid animal right activist has been working on the project through his Ian Somerhalder Foundation since 2010, but he has faced several roadblocks, including securing a plot of the land and raising enough funds to run the sanctuary properly.

But Somerhalder and his foundation partners have finally reached their goal and are ready to open the place, which will offer refuge to abused, unwanted or neglected animals and pair them with young victims of bullying.

A statement from Somerhalder to JustJared.com reads: "We have received incredible support from our Isf family towards this project... What we found was, as much as we were tirelessly saving our funds for the last 3 1/2 years to purchase the sanctuary land, it wasn’t going to be enough.

"But that wasn’t going to stop us. Walls are excellent to hit sometimes because they force you to find a way to lace up some rock climbing shoes and work your way over them.

"This is why I have committed to personally guarantee any required loan on the property and to donate the funds required for the mortgage payments to a million dollars so we can facilitate the purchase of the land and the project can move forward. This land, this delicate bayou ecosystem, is imperative to protect and we are dedicated to doing so."

While Somerhalder did not reveal exactly how much he and his backers have raised so far, their initial goal to build the sanctuary was set at $5 million (Gbp2.9million).