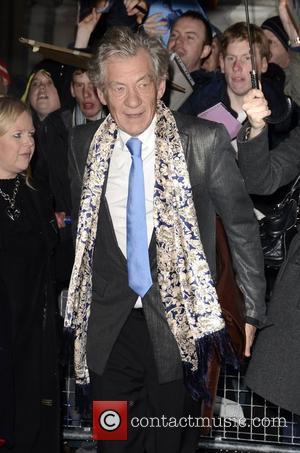 Sir Ian McKellan has been enjoying some serious longevity with his career. It began on stage in 1959, and now more than 50 years later he is one of the most famous and beloved actors in the English speaking world. He's best known for his role as Gandalf, which for many Shakespearean actors may seem to be a sell-out, but for Ian McKellan, as he told Vanity Fair, he's more than proud of his involvement with Lord of the Rings.

Another colleague captured in a very similar bracket as him as Michael Gambon who has also found increased fame playing a Wizard in recent years, as Dumbledore in the Harry Potter movies. Apparently, they both get mistaken for each other "all the time!" So, how do they combat the confusion? For Gambon, he simply signs McKellan's name, perhaps so as not to cause disappointment, or more likely, to avoid the hassle of explanation. Well, being mistaken for either one of them is an enormous compliment in regard to talent!

Aside from the upcoming Hobbit movies, McKellan will also be starring alongside Derek Jakobi in a new ITV comedy about an ageing gay couple living in Covent Garden. McKellan himself is gay, so the topic of the show is close to his heart. He confesses, "[Being gay is] probably one of the reasons I became an actor... I was never closeted with friends and colleagues in the professional theater, but I wasn't out to my closest blood relatives... the minute I came out, I felt immediately better in every way. I felt relieved that I wasn't lying."

Both the ITV comedy 'Vicious' and his return as Gandalf, for the first of three instalments of Peter Jackson's The Hobbit, will be released next year. Plus, it has been revealed today that McKellan will once again be joining the X-Men for the next film X-Men: Days of Future Past, along with Patrick Stewart.