Review of Slow Down Album by Hyde & Beast

In the course of popular musical history there have been many bands that have used the two drummer format to enhance their sound. Adam And The Ants, The Glitter Band and The Fall have all found worth in a multiple percussive presence. Some drummers have found the need to up sticks and step up to the plate as the frontman/woman to fulfil their ultimate musical destiny. Phil Collins, Frankie Rose and Dave Grohl have all realised more musical 'success' after venturing forward to take up the mic. Some drummers are just famous, or at least renowned, for their drumming! Keith Moon, Neil Peart and Cozy Powell to name but a mere few have all been revered as outstanding drummers of their time. Has there ever before though been a memorable band formed of two drummers from two separate, moderately successful, bands that have met and formed an entirely new band? (Answers on a postcard please)

Hyde & Beast are such a band, 'Slow Down' is the album and the resultant 11 tracks probably go some way to answer the question as to why those band names don't exactly fall out of your mouth with ease. It's also probably not done because generally if you floated the notion you'd get a less than warm response because you couldn't imagine it being a very fruitful partnership. Having saved us the issue of using our imagination Slow Down actually gives us all the chance to hear if there is any mileage to be had from two beat boys banging out some collaborative tunes.

Combining the talents of Dave Hyde, from The Futureheads, and Neil 'Beast' Bassett formally from the Golden Virgins, has resulted in what they describe, in a questionable approach to positive pr spin, as a "Gentle psychedelic mess". H&B's brand of psychedelia is more of a washed out sepia toned trippy stoner style of early Pink Floyd or 'experimental' Beatles rather than that of the more spaced out kaleidoscopic and vibrant 13th Floor Elevators. The haziness of the mix places you unashamedly back in the late 60's early 70's era where everything's cool and there's never a better time to chill than now. (Is Sunderland the new San Fran??.......err no, but it's rarely unenjoyable to try and make a bigger splash in someone else's free form pool))

First single, 'Never Come Back', with its multi-layering, harmonies and simple but effective hooks, sets up the album nicely. The Alan Price like piano that threads through the track works well set against the bawdy horns and tempered rhythms. A more warped perspective of a subtle psychedelic nature permeates through on 'If You Could Buy Me Anything' where a vague sitar like drone under pins the falsetto vocal, tambourine and guitars. The bass beats get slightly more funky on 'All Because Of You' before the beat picks up for a Mungo Jerry infused 'You Will Be Lonely'.

'Trees Are Falling' , followed by 'Last Chance For A slow Dance', reels us back into a floating hypnosis delivering a double dose of H&B's hallucinatory mixture. A distinctly T-Rex stylised guitar rings out through the short but sweet '(And The) Pictures In The Sky' and we even get some old school blues licks on the even shorter 'Wolfman Blues'. The album closes out with a triptych of mellow, gentle and tender tunes ending with the dreamy waves of, near instrumental, 'Louis' Lullaby'.

As a debut 'Slow Down' throws up plenty of surprises, especially when you consider the collaborators previous output and the usual instrumentation they have been constrained by. The vocal harmonies are beautifully sung throughout and there is little or no inclination at all that Hyde & Beast are 'just two drummers', if anything the whole percussive spectrum is the one least explored. There are no 'Ant Music' double drum intros here. As an interesting aside the whole project, recorded in only eleven days, is certainly more dynamic and creative than initial scepticism had me believing. It may not win any prizes but it's certainly a step in the right direction for both protagonists. 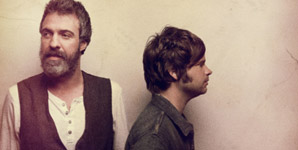