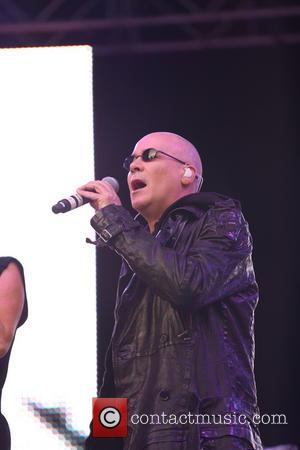 Eighties chart-toppers The Human League are on the verge of a chart resurgence in the U.K. thanks to fans of Aberdeen Football Club in Scotland.

The band's Don't You Want Me hit has been adopted by the soccer lovers and it has become an anthem in the stands for Aberdeen's run in the Scottish League Cup, which the club won on Sunday (16Mar14).

To mark the victory, fans have launched a campaign on social media in a bid to get The Human League back to number one. The band, led by singer Phil Oakey, is not expected to chart so high this weekend (23Mar14), but experts predict the song will return to the top 10.

Thanks to the campaign, the '80s act has been offered a spot at Scotland's T in the Park festival this summer (14).

Oakey says, "It has been a long held ambition of ours to play at this iconic festival and we were delighted to be asked to be part of such a diverse and exciting bill. See you all soon."

They will join the likes of headliners Calvin Harris, Biffy Clyro and Arctic Monkeys and Ellie Goulding, Bastille, Pixies, Haim, Manic Street Preachers and Pharrell Williams, among others on the bill at the event in July (14).

Human League - All I Ever Wanted