Hulk Hogan has revealed he is training hard to have another match in WWE and says he's in fantastic shape and is over the back injuries that have plagued him in the last few years. 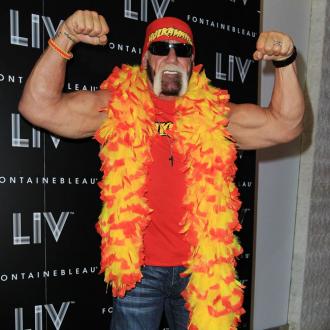 WWE Legend Hulk Hogan is training hard for a return to the ring.

The Hall of Fame Superstar has not competed in a match for World Wrestling Entertainment for nearly 10 years but he now has his sights set on a return to competition.

Hulk, 61, has been hitting the gym like he's getting ready for a world title match and he's hoping his bosses Vince Mcmahon and Triple H give him the green light to lace up his boots again and finish his career in the WWE.

Speaking about a potential return to the ring, he exclusively told BANG Showbiz: ''I got some advice from a wise man, his name is Vince McMahon and he said, 'Never, say never.' I'm back home in the WWE, this is where I started, I'm home and to end the legacy and put the period on the end of the sentence I am training right now like I'm getting ready for the WWE Championship. You just never know when Hulk Hogan is going to tear the house down. It could be any time, it could be anywhere. I am training and getting ready for my last match, my last run or my retirement match. It's not over until the fat lady sings and I haven't put the period at the end of the sentence yet.''

The multi-time world champion has been plagued with back injuries in recent years but he insists his physical problems are in the past and he's currently in fantastic shape.

Hulk added: ''My back is straightened out after nine back surgeries, everything seems to be on track and working really well.''

The iconic star is hoping to compete at 'WrestleMania 31' on March 29 and he believes he any match could be the start of a more permanent return to active competition.

Discussing a potential bout at WWE's showpiece event, he said: ''If it happened I would want it to be the greatest match of all time, of course ... If it's the end of my career and a huge emotional send-off that would be great, or if it's the beginning of another huge run for Hulkamania and me chasing the dream of winning the WWE title, that would be brilliant. I'm thinking very positively about getting back in the ring.''

'WrestleMania 31' can be watched on the WWE Network - available via subscription at WWE.com for £9.99 per month - which has surpassed one million subscribers just 11 months after being launched.

In a statement, the company's Chairman Vince McMahon said: ''We're thrilled that we've surpassed the one million subscriber milestone less than a year after launching WWE Network and in advance of 'WrestleMania'.''