Hulk Hogan Has Battery Powered Back

Hulk Hogan has revealed he has a painkilling battery in his back which is operated by remote control and makes his ''nipples and wiener'' stand up. 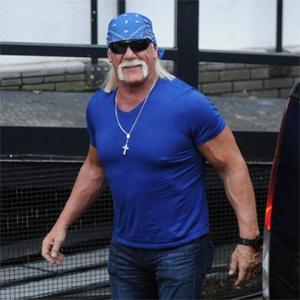 Hulk Hogan has a painkilling battery in his back which makes his "nipples and wiener" stand up.

The wrestling legend - who has undergone eight back surgeries - controls the electrical device with a remote control and if he turns up the current high enough it has some interesting side effects.

Hulk - who is in the UK on the TNA Maximum IMPACT Tour - exclusively told BANG Showbiz: "It's an electric stim you know? If the pain in my back is too bad and it goes to my head, there's an electrical current that I can turn on that will cancel out any pain waves, it pretty much makes you so you don't feel the pain. It's not a drug, it's just electricity. I've got like a garage door controller with all these buttons on how intense I want to make it, my nipples stand on end if I want to! And my wiener stands straight. It's much better than Viagra!"

Eric quipped: "When he's walking down a small neighbourhood he opens every garage door on the street!"

Hulk - real name Terry Bollea - claims his numerous injuries and his damaged back mean he probably should have quit The Ring already.

But the wrestler-and-actor competed in Nottingham on Thursday night (26.01.12) and says he is willing to put his body on the line to have "fun" with the fans.

When asked how long he can continue to compete, the 58-year-old star said: "I'm done bro any time I get in there it's just a bonus, my days of being in the main event at Madison Square Garden and dropping the leg and having a five minute or 25 minute match are over. But anytime I can get in there it's because there's an opportunity to have fun or it's an opportunity where we need to do business or I just need to shake my tail feathers and come out of the zone I'm in, but anytime I'm in there is just a bonus, you know."

Hulk is scheduled to compete again tonight (27.01.12) at the Manchester MEN Arena before the British tour heads to London's Wembley Arena on Saturday (28.01.12) where TNA will film its flagship TV show 'IMPACT Wrestling' for the first time outside of the US.

Tickets are still available for the two remaining dates and can be purchased from www.gigsandtours.com and www.ticketmaster.co.uk.