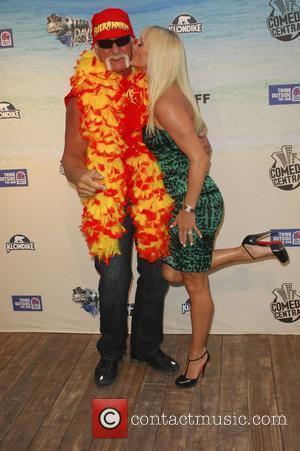 Hulk Hogan's son has no idea who to believe over reports his mother LINDA is engaged to marry her toyboy lover - because he "knows nothing" about it.
Wrestler-turned-reality TV star Hogan split from his wife Linda in 2007 and entered divorce proceedings, putting an end to their 24-year marriage.
The wrestler, real name Terry Bollea, went on to propose to his 36-year-old girlfriend Jennifer MCDaniel shortly after the proceedings were finalised last year (09).
Last week (ends30Jul10), tabloid reports suggested Linda was also set to walk down the aisle and marry her boyfriend of two years, 21-year-old Charlie Hill, next summer (11).
But 20-year-old Nick Bollea is baffled by the rumours.
He tells Usmagazine.com: "Nobody has actually confirmed it to me. Nobody said anything about an engagement. There was no champagne, no party, no big happy celebration."
Nick confronted his mum about the reports and claims she brushed off the rumours - but the youngster still has his suspicions after Linda was spotted wearing a band on her ring finger.
He explains, "She denied it (marriage rumour) and said, 'No, they are just promise rings.'
"But then everyone else I hear it from says it's true. I don't know. My mum could be trying to get one over on me just because she doesn't want me to be weirded out, but who knows. That's the truth on my end!"