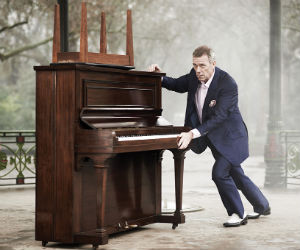 After the huge success of his debut album 'Let Them Talk' on which he celebrated and revived classic material from the world of NOLA blues, Hugh Laurie will release his second album 'Didn't It Rain' on May 6th on Warner Music Entertainment. The release of the album will be followed with a major UK tour.

'Didn't It Rain' sees Hugh Laurie depart the sounds of New Orleans as he follows the trajectory of the blues upstream and into the American heartland. It includes songs dating back to early pioneers W.C. Handy ('St Louis. Blues') and Jelly Roll Morton ('I Hate A Man Like You') to more recent artists such as Dr. John ('Wild Honey') and Alan Price of The Animals ('Changes').

'I have resolved to forge on, deeper into the forest of American music that has enchanted me since I was a small boy,' explains Laurie. 'And the further I go, the more bewitched I become - both by the songs and by the people I have been lucky enough to play them with.'

Again produced by Joe Henry, 'Didn't It Rain' was recorded at Ocean Way Studio in Los Angeles in January of this year. Complemented with the heart and accomplishment of his supporting musicians the Copper Bottom Band - Jay Bellerose, Kevin Breit, Vincent Henry, Greg Leisz, Robby Marshall, David Piltch and Patrick Warren with Elizabeth Lea and Larry Goldings - the album also features several lead vocal performances from Guatemalan singer-songwriter Gaby Moreno and soul singer Jean McClain who has previously worked with artists as varied as Jimmy Cliff and Sheryl Crow. The album also highlights a very special guest in the shape of the Grammy-winning blues artist Taj Mahal who contributes vocals to a new take on Little Brother Montgomery's 'Vicksburg Blues'.

'Didn't It Rain' will be released on CD, deluxe edition book CD with additional content, vinyl, and digital including an iTunes exclusive package.

On March 26th Hugh Laurie and the Copper Bottom Band will perform on the Queen Mary, a retired ocean liner moored at Long Beach, California. One of Laurie's greatest musical heroes, Professor Longhair, famously performed on the ship at a party that Sir Paul McCartney hosted for his wife Linda in 1975. His set concluded with 'Stagger Lee' (interpreted by Laurie on the deluxe edition of 'Didn't It Rain') and was captured on his renowned album 'Live On The Queen Mary'.

Highlights from the show will be featured in the ITV Perspectives documentary 'Copper Bottom Blues' which will be broadcast on May 5th. The programme will follow Hugh Laurie as he travels across America delving into the history of blues and roots music that has inspired his own musical journey.

Having earned widespread critical acclaim for their shows in support of 'Let Them Talk', Hugh Laurie and the Copper Bottom Band will follow the release of 'Didn't It Rain' with a major UK tour in June. The Copper Bottom Band's touring line-up features several of the musicians who appear on the album - Piltch (bass), Henry (horns), Lea (trombone), McLain (vocals) and Moreno (vocals) - and is completed by Herman Matthews (drums) and Mark Goldenberg (guitars).