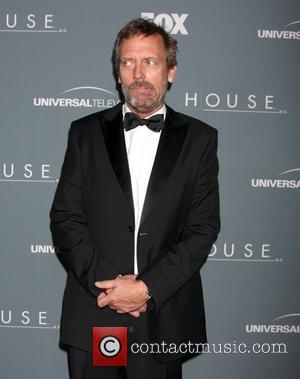 He almost felt like an anti-hero in 'House,' and now Hugh Laurie looks like he's going to be a straight-up villain after confirmation that the British actor and blues fanatic is in talks to appear in in the remake of the classic sci-fi film 'RoboCop', according to Variety.
The original film came out in 1987 and has become something of a classic in the eyes of many sci-fi fans, and should he choose to get involved in the reboot, Laurie would be playing the chief villain himself - the Ceo of Omni Corp, which creates man-turned-machine RoboCop for his own gain.
Should the former 'Blackadder' man sign up for the role, he'll be working with 'The Killing' star Joel Kinnaman, the cop Alex Murphy, who is turned into the cyborg crime-fighter. Others looking set to be involved include Abbie Cornish, who would play Murphy's wife, and Gary Oldman who would play the creator of RoboCop. There are also rumors that Samuel L Jackson will be making an appearance although as yet they are nothing firmer than that. They'll need to be confirmed soon however, filming for the movie kicks off in Toronto this September and the film is expected to be released in 2013. It'll be a sharp change from the HBO role Laurie's been holding for the last eight years as Dr. Gregory House at any rate.