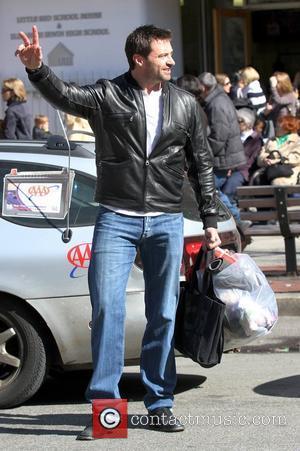 Picture: Hugh Jackman hailing a taxi while enjoying a sunny day in Manhattan with his wife and daughter New York City, USA - 17.03.11

Movie bosses behind Hugh Jackman's upcoming Wolverine sequel and James Cameron's Avatar 2 have reportedly put the projects on hold in the aftermath of the earthquake and tsunami disaster in Japan.
The Australian actor is due to reprise his role as the clawed superhero for a sequel to 2009's X-Men Origins: Wolverine, which will see much of the action set in Japan.
The project suffered a blow with the recent departure of director Darren Aronofsky, and now plans to film in Japan have been postponed following the devastating 9.0-magnitude tremor and subsequent tidal wave which tore through the country on 11 March (11), according to EW.com.
The events in Japan are also said to have affected Cameron's work on the second Avatar movie - he had planned to head to the country to film underwater sequences in the Mariana Trench, located in the Pacific ocean to the south-east of Japan.
But movie bosses have now reportedly scrapped the planned dive amid fears of aftershocks and rising insurance costs, according to Screenrant.com.