The British comedy Eddie the Eagle tells the true story of ski jumper Eddie Edwards who came in dead last at the 1988 Calgary Winter Olympics.

Designed as a crowd-pleaser, the film has an infectious energy that wins over the audience because it never takes itself seriously. Costar Hugh Jackman, who plays Eddie's coach Bronson, says that this tone is called "being English". 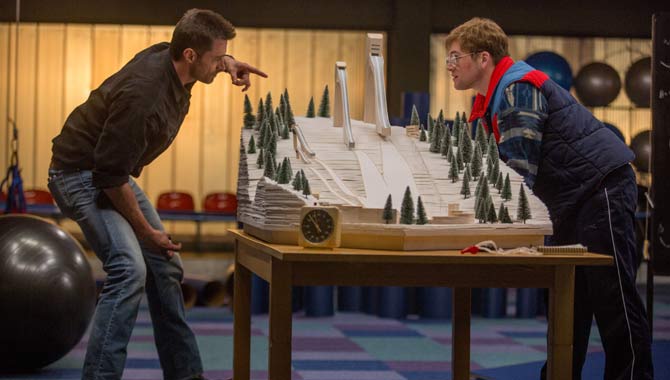 "The movie has that kind of British Full Monty quality," he explains. "If you're too earnest and on the nose in England, it's never a good thing. And I don't think Eddie would've liked it, to be honest. I think he enjoyed having a good laugh, and if anyone ever in sports has shown it's OK to have a little bit of a laugh at yourself, it's Eddie."

Jackman says he was also drawn to the project because "I've always felt like an underdog", and even though his hard-drinking coach is a fictional composite character, he stresses that the film's plot is all true. "There are some deviations," he says, "but actually the key things, the most amazing things, like the fact of his jumping and the injuries and the coming back, the fact he was sleeping in a closet in a mental institution when he got the letter from the Olympics - all that is true!"

While he admits that he's often offered reluctant hero roles, because of Wolverine, he says that this film was irresistible. "I just loved the story," Jackman says. "If there had been some other construct or character, I probably wouldn't have even heard of it. But I think all of us like to think that there is a second chance for people. And you know, he's someone who lives with a lot of regret and has therefore turned quite cynical about the world because deep down he realised he scuffed up his chance through a lack of self-belief. I love the idea that people can redeem themselves."

And he found Taron Egerton's portrayal of Eddie truly inspiring. "Eddie was a legend who embodies that pure spirit of having a go," Jackman says. "And he had a go at the most crazy, almost suicidal event in sport, the ski jump. I mean, I wanted to be in the Olympics as a kid. I just wasn't going to go that far."

Watch the trailer for Eddie The Eagle: