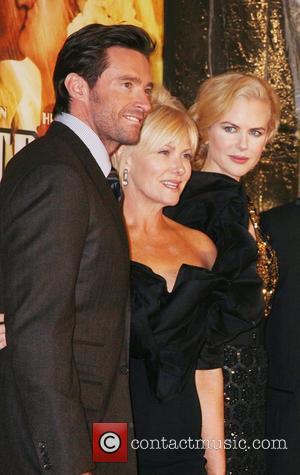 Hugh Jackman dodged death during a horse-riding stunt on the set of new movie AUSTRALIA, thanks to the stuffy rules set by the film's safety officer.
Jackman was left red-faced when the officer, on-set on the insistence of the film's insurers, forced him to wear a helmet and padding for a training exercise with a bucking horse.
But the precaution saved him from a certain death, when the horse violently threw him on the ground.
He explains, "Six months into training they brought in a rearing horse.
"The safety officer happened to be onset. He's always a chump. He's the guy nobody wants around. He came over with a motorcycle helmet and a padded jacket. He was like, 'Please wear it, please. For insurance.' All the horsemen were sniggering, saying, 'Wuss'.
"I reluctantly put it on. As I pulled on the reins, the horse's head came back and hit me on the motorcycle helmet. I flew back off the horse and landed on my back. I didn't move for about five minutes.
"I'm pretty sure (if I hadn't worn the helmet) I would be dead."
But Jackman's pain wasn't over - he also had to contend with an old Aussie horseman's tradition, that ended up costing him dear.
He explains, "In Australia, if you fall off a horse, you have to say the words 'just taking a piss' before you hit the ground. If you don't get the words out, you have to buy a bottle of whiskey for everyone in the horse crew, which is about 25 people."