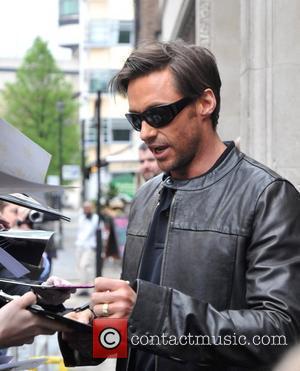 Picture: Hugh Jackman is happy to sign autographs after being mobbed by fans upon leaving the Radio One studios. The antipodean hunk is in the city...

Hugh Jackman accidentally stabbed a stuntwoman in the arm while filming the first X-Men movie - during a fight scene as his clawed character Wolverine.
The Australian actor had to wear real metal talons while filming the 2000 comic book blockbuster and admits handling the prop was quite dangerous.
Jackman recalls one incident which left Rebecca Romijn's stunt double seriously hurt - forcing moviemakers to rethink how to film the scenes involving the superhero's famous claws.
He says, "On the very first film we had real metal claws and the girl who was playing Mystique, Rebecca Romijn, her stunt double and I were doing a fight sequence in the Statue of Liberty. I went to stab her in the arm, which was part of the choreography, and she's meant to move her arm away and she forgot and the thing went right into her arm, like an inch.
"I was stunned. It was one of those things, it was so deep, there was a hole, there was no blood coming out and then like a minute later, it was like a geyser. I didn't faint and I thought she was going to freak out, but she just said, 'Yes! I have been stabbed by Wolverine!' Typical stuntwoman."
And Jackman admits that subsequent efforts to prevent him using real metal claws were not particularly successful - and even involved him using a fake limb with one arm tucked behind his back. The prop was only used in one scene before it was discarded.
Jackman's latest outing as the superhero, X-Men Origins: Wolverine hits cinemas on 1 May (09).