Hugh Jackman has shaved his head to play Blackbeard in the 'Pan' and revealed his new look on Instagram, which shocked some of his fans. 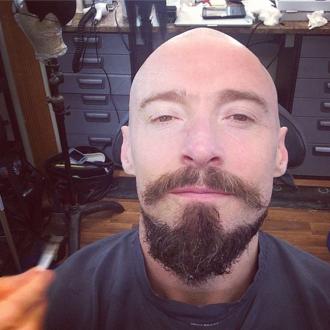 Hugh Jackman has shaved his head to play Blackbeard in the new 'Peter Pan' remake.

The 45-year-old actor, who has been shooting scenes in England for 'Pan', revealed his new look on Instagram and accompanied the photograph with the caption: ''Blackbeard is born. #PAN. (sic)''

Jackman is well known for his thick black hair and some fans were a little disappointed to see his bald head as he got into character for the film just days after this year's Tony Awards.

Meanwhile, others were more complimentary about his lack of hair, with one fan writing: ''Still handsome mate.. that's never gonna go away (sic),'' and another joked, ''Awkward moment when bald Hugh Jackman sill better looking than you. (sic)''

The actor has been working with Les Miserbales co-star Amanda Seyfried, who plays Mary, while Rooney Mara is set to take on the role of Tiger Lily and Garrett Hedlund is Hook. Child actor Levi Miller will play the lead role of Peter Pan.

Jackman's character in the movie trained Captain Hook before he became Peter Pan's enemy and he will return in 'Pan', a Joe Wright-directed update of the classic fairytale.

Speaking about Jackman's casting in the new movie, Warner Bros. president Greg Silverman said: ''We know he will create a Blackbeard who will be a powerful presence in this original Peter Pan adventure.''