Following his treatment for basal cell carcinoma, the 45 year-old actor took to social media to warn people about the risks of too much exposure to sunlight. 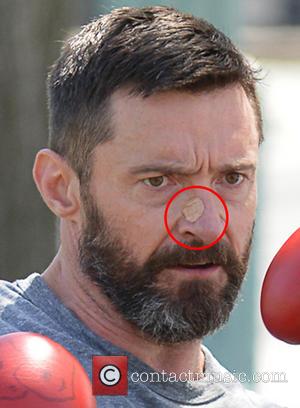 Hugh Jackman has had to receive treatment for skin cancer for a second time.

The 45 year-old actor posted a photograph on his Instagram account this past Thursday (May 8th), sharing with fans his recent procedure to remove skin cancer from his nose.

The pic shows Jackman with a bandage on the right side of his nose, where the cancerous skin cells were located.

"Another Basal Cell Carcinoma," the 'X-Men: Days of Future past' actor captioned the snap. "All out now. Thanks Dr. Albom and Dr. Arian. Please! Please! Wear Sunscreen!"

Jackman's concerned fans immediately began commenting on the photo, sending him their well wishes, as well as praising him for the advice.

"Good on u putting ur health first and encouraging everyone to do the same," one follower wrote, with another adding, "Get well soon, sorry to hear this."

This is the Australian star's second fight with the common form of skin cancer, he was first diagnosed with the disease last November (2013) and posted a similar photo of himself healing from the treatment.

"Deb said to get the mark on my nose checked," he wrote on November 21st. "Boy, was she right! I had a basil cell carcinoma. Please don't be foolish like me. Get yourself checked. And USE sunscreen!!!"

MORE: Hugh Jackman Goes Back In Time To Warn Younger Self Not To Make Movie 43

Jackman is just one of many fellow high profile celebrities who have also been diagnosed with the same type of cancer, which includes, Bruce Jenner, Sarah Paulson Eric Dane, Ewan McGregor and Anderson Cooper.

MORE: Hugh Jackman Returning To Broadway In 'The River'

Jenner spoke with E!News when first diagnosed: "It's all sun damage from the '60s and '50s when I was competitively water-skiing and living on a lake and all my training outside, Nobody wears sunblock back then. I first had one here," he pointed to his cheek, "just a little red spot. It's a basal-cell carcinoma, which is a-basically it is a skin cancer, because it doesn't heal."