Hugh Jackman has cocktails for anniversary 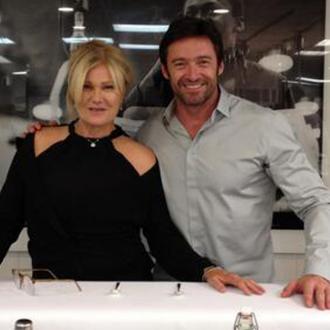 Hugh Jackman and his wife had cocktails to celebrate their wedding anniversary.

The 'Les Miserables' actor and his spouse Deborra-lee Furness marked 17 years of marriage by downing expensive drinks at the Eleven Madison Park restaurant in New York City on Thursday night (11.04.13).

Hugh proudly tweeted a photo while the pair wined and dined in marital bliss from inside of the restaurant's kitchen.

In his Twitter post, he said: ''Deb & I in the kitchen having a cocktail at 11 Madison Park! What a way to celebrate 17 incredible years of marriage! (sic)''

Hugh and Deborra first met on the set of Australian TV show 'Correlli' and tied the knot in April 1996 at St. John's in Toorak, Victoria, Melbourne.

The 44-year-old actor has previously admitted it was love at first sight when he met his partner.

He said: ''It was the clearest thing in the world for me. I knew 100 percent ... I've never known anything as confidently or sure in my life that she was the one I was going to be with.''

A day before the anniversary celebration the couple were spotted with seven-year-old daughter Ava as the family exercised in New York City.

Deborra 57, raced on a scooter alongside her daughter while Hugh jogged with their family dog.

The lovers - who also have a 12-year-old son Oscar - sneaked a quick kiss before getting back to their fitness regime as Hugh prepares to reprise his role as 'Wolverine' in the 'X-Men' spin-off.