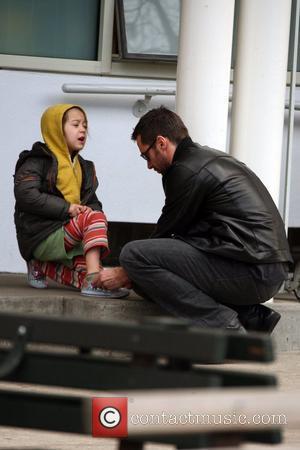 Picture: Hugh Jackman out for a walk with his daughter Ava Jackman New York City, USA - 14.02.11

Hugh Jackman was forced to keep a huge secret from his actress wife Deborra-lee Furness as he helped organise a special Australian TV tribute in her honour.
The X-Men star struggled to keep quiet after Furness was selected to have her achievements and career celebrated on documentary show This Is Your Life, which is set to air Down Under on Monday (28Feb11).
In the taped tribute, Jackman reveals, "I'm not good at keeping secrets, but she has no idea," before a stunned Furness is welcomed onto the set and informed she will be the star of the show.
The couple, who married in February 1996, later relived their wedding day by dancing to All the Way, sung by Tom Burlinson and Kate Ceberano.
Fellow Aussie actresses Naomi Watts, Sigrid Thornton and Nicole Kidman, and comedian Jerry Seinfeld all appear in taped video messages, with the funnyman declaring: "She (Furness) is not a woman who is overwhelmed or thrown for a loop by anything in this world."