Hugh Hefner Was 'Too Young'to Marry Before Now

Hugh Hefner's former girlfriend Kendra Wilkinson is delighted about his engagement and thinks he would not have been mature enough to marry before now. 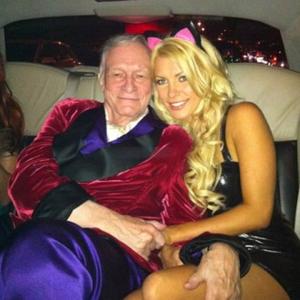 Hugh Hefner was "too young" to get married again before now, according to Kendra Wilkinson.

Kendra - who admitted she was surprised Hugh never married former girlfriend Holly Madison - told In Touch magazine: "We all thought it was going to be Holly! He's like any man - he was having fun and wasn't ready. I guess he was too young!"

Holly has previously revealed her dismay at the engagement, saying she is worried Crystal is using Hugh - who has been married twice before - to start her career and fears he could end up losing everything in an expensive divorce.

She said: "I've seen a lot of girls try to date Hef, and some have ulterior motives. I don't think it would be a bad idea for him to get to know her a little better. "I think it's possible Crystal could break Hef's heart. They could end up divorcing, and she could take half his money.

"I'm not jealous that he'd marry someone else. I just don't want it to be a girl who's using him to start her career. Basically, I think he could do better than Crystal."