Playboy Boss Hugh Hefner's Son Is Giving Up The Single Life After Asking British Actress Scarlett Byrne To Marry Him. 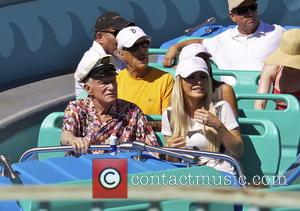 Cooper Hefner, 23, popped the question to his girlfriend, who played Pansy Parkinson in three Harry Potter films, in London on Tuesday (04Aug15) after asking her father for his daughter's hand, according to Us Weekly.

The couple celebrated its engagement with family members and friends at London's Ritz hotel, and Cooper posted a photo of his bride-to-be's hand sporting a massive yellow diamond on social media.

Cooper is Hefner's son from his second marriage to Kimberley Conrad.

As well as featuring in the Harry Potter films, Byrne has also appeared in cult U.S. TV series Falling Skies and Vampire Diaries.