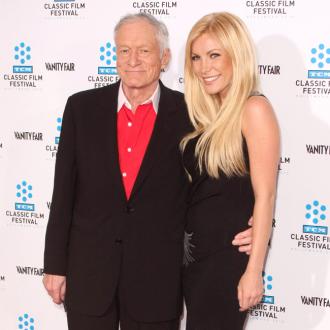 Hugh Hefner and Crystal Harris' wedding is back on.

The aspiring singer left the Playboy mogul shocked when she called off their wedding just five days before they were due to marry in June 2011 but the moved back in together last May after Crystal, 26, begged Hugh, 86, for forgiveness and are now said to be planning to get married on New Year's Eve at the Playboy mansion in Los Angeles.

According to gossip website TMZ.com, the couple have only invited close friends and family members to celebrate their special day later this month.

They are said to have completely resolved the problems which previously led to the model getting ''cold feet''.

Speaking after she backed out of the wedding last year, Crystal explained she knew it wasn't the right step for her.

She said: ''I got cold feet. Over time I just realised it wasn't for me, it was all happening so fast.

''I actually spoke to Hef about it before I left and we both came to the decision that getting married wasn't the best for either of us.''

She said: ''There was couch cuddling, movie nights. Hef's like a big kid.''

Asked if the relationship was physical, she added: ''In the beginning, but after a while it just wasn't the most important thing to him.''