Hugh Hefner is dating a new Playboy model, Anna Sophia Berglund, who was to be the maid of honour at his wedding to Crystal Harris. 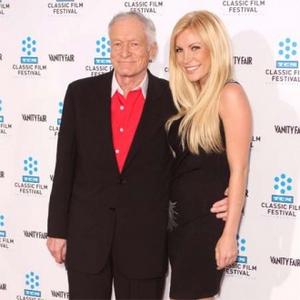 The jilted magazine founder is getting over his split from Crystal Harris - whom he was set to marry on Saturday (18.06.11), before they broke off their engagement last week - with Anna Sophia Berglund.

The Playmate of the Month for January 2011 has reportedly moved into Hugh's bedroom and the pair have already started calling each other "babe", accord to various reports.

They were also spotted canoodling at a recent movie night at the Playboy Mansion in Los Angeles, where 85-year-old Hugh lives.

Anna, 25, was close friends with Crystal, also 25, and had even been picked as her maid of honour for the wedding.

Meanwhile, Crystal has said she is "doing OK" following the split, and she was pictured reading the latest issue of Playboy - which she is on the cover of, with a sticker over her reading "Runaway Bride" - at a pool party in Las Vegas.

Asked why she called the wedding off, she added: "I wanted to be true to myself and be true to what was best for everybody. It was a mutual decision between the both of us. I'm giving Hef back The Ring ... I just want to move forward."

Hugh's friends have reacted badly to the way Crystal was spotted posing for pictures in a bikini at the pool party, just days after the engagement was called off, with his ex-girlfriend Holly Madison tweeting: "That's disgusting and whoever booked her is tacky!"