Playboy boss Hugh Hefner has received an invitation to KISS rocker Gene Simmons' wedding and is thrilled he and his fiancee Shannon Tweed are finally tying the knot. 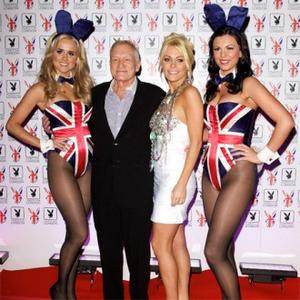 Hugh Hefner has been invited to Gene Simmons' wedding.

The Playboy boss has received an invitation to attend the nuptials of the KISS rocker and his fiancee Shannon Tweed on October 1.

Hugh is very excited for the couple, who have been in a relationship for 28 years, because Gene and the former Playboy Playmate met at his home.

The 85-year-old business mogul - who is famous for throwing wild parties at his Playboy Mansion in Los Angeles - also revealed he was visited by his ex-girlfriend Holly Madison yesterday (01.09.11).

The 31-year-old blonde beauty decided to drop in to see Hugh on her day off from Las Vegas burlesque production 'Peepshow'.

He tweeted: "Holly came by & had dinner at the Mansion with GND producer Kevin Burns on the day off from her Vegas show "Peepshow." Good to see her. (sic)"

Gene and Shannon - who appear together in the reality TV show 'Gene Simmons: Family Jewels' - announced their wedding date this week and will be tying the knot at the Beverley Hills Hotel on Sunset Boulevard, California.

The invitations the couple sent out contain a picture created by their son Nick, 22, and a message written by their 19-year-old daughter Sophie.

The note read: "There will no longer be a Team Tweed or a Team Simmons but instead a Team Tweed-Simmons."