Hugh Hefner and his wife dressed up as Robin Thicke and Miley Cyrus for a Playboy Halloween party, spoofing their controversial performance at the MTV Video Music Awards. 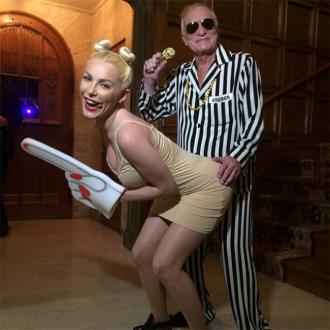 Hugh Hefner and his wife dressed as Robin Thicke and Miley Cyrus for Halloween.

The 87-year-old Playboy magnate and his 27-year-old spouse Crystal Harris opted for a topical costume for his annual Halloween party at the Playboy Mansion in Los Angeles, California, on Saturday (26.10.13), as they spoofed the controversial MTV Video Music Awards performance from August.

Hugh wore a pinstriped suit and dark sunglasses just like 'Blurred Lines' crooner Robin, 36, while Crystal was adorned in a flesh-coloured dress - similar to the latex two-piece bikini worn by Miley - and put her blonde hair into pigtails like the 'Wrecking Ball' hitmaker.

Crystal shared a humorous picture of their costumes on her Instagram account, which shows her bending over in front of her husband with her tongue sticking out. The blonde beauty also has a large foam finger on display.

The costumes are an homage to one of the most talked about moments of the year when Miley provocatively performed with Robin at the VMAs in August.

The raunchy performance saw the 20-year-old singer twerk, grind against Robin's manhood and suggestively touch herself with a foam finger.

Miley's antics have since been criticised by stars including Cher, Pink, Kelly Clarkson and Sinead O'Connor.