Hugh Grant thinks it is important to have an emotional connection in comedies, but admits he is ''s**t'' at portraying dark and deep feelings. 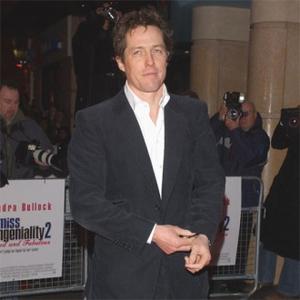 Hugh Grant is "s**t" at portraying "dark" emotions on film.

The 51-year-old actor is best known for his work in romantic comedies such as 'Four Weddings And A Funeral' and 'Bridget Jones' Diary' and while he thinks it is important for all films to have an emotional connection, he doesn't want to venture into more series dramas.

He said: "It's not that I want to play these deep, dark emotions. I'm pretty s**t at that. But if you're making a film that lasts 90 minutes, you're in trouble if there isn't some heart or bottle.

"It can be funny for 20-25 minutes if it's TV but take the 'Airplane!' films. I p***ed myself for 25 minutes but then you get exhausted because there's nothing happening that isn't jokes. You've got to be emotionally involved.

"Comedy is always funnier and richer when it's dealing with pain."

Hugh feels he is "to blame" for his typecasting as a bumbling English gentleman because the success of 1994's 'Four Weddings and a Funeral' made him feel that was what people wanted to see from him.

He told Total Film magazine: "Typecasting is partly my fault. I signed up to a few films before 'Four Weddings', two or three of which had diffident Englishmen parts and I didn't sign out of doing those films after I became successful.

"So it's partly to my credit, fulfilling my obligations, but it's also to my discredit that my sudden success with 'four Weddings' made me think, 'Oh everyone likes me being that bumbly person' and that bled into my real life.

"I look back at some of the interviews I did In America in those years and I wince. I think, 'What the f**k were you doing that for you t****r?'

"So it's likely that I'm to blame for some of the deep rut of typecasting I fell into at that point."