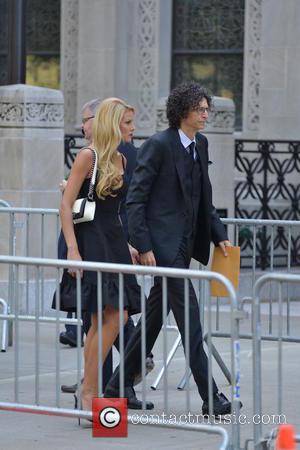 U.S. radio shock jock Howard Stern was hesitant to give a eulogy for late friend Joan Rivers as he was convinced he was the wrong man for the job.

The America's Got Talent judge was among the many stars who attended the veteran comedienne's glamorous New York City funeral on Sunday (07Sun14), days after she died after suffering a cardiac and respiratory arrest during a routine throat operation.

During his daily radio show on SiriusXm on Monday (08Sep14), Stern admitted he wasn't sure he could deliver a proper eulogy for the beloved funnywoman.

He explained, "To be at her funeral yesterday was really probably the most remarkable service I have ever been witnessed to... I got there early because I had gotten a call from (Joan's daughter) Melissa like a day and a half before the service, asking me if I would speak. I said to her, 'Melissa you're asking the wrong guy.'

With only a day to prepare, Stern sought out the help of fellow comedian Louis C.K. for advice on the speech, and said, "I was in touch with Louis C.K. and he'd written me and he said, 'You know, Joan really deserves a great sendoff because of her impact.'

"He said something very profound: 'Joan was like an aunt or a best friend who could make everything better. And even in times... after lets just say 9/11 or the country just seems to be going downhill or things just seem to be bad... she would crack a joke, and you know this is true, when she would crack a joke, you didn't feel so alone. You felt like we were all together and you felt like oh maybe things aren't so bad.'"

He continued, "Louis said probably the loneliness and the unhappiness of life - what else could ease that despair than a great comedian? That's what great comedians do. Great comedians have the ability to snap you out of this sadness, this loneliness...to set it all right again and she was really really a top pro."

Stern also admitted he shed some tears at the touching service thanks to Hugh Jackman, who honoured Rivers' memory with a rendition of Peter Allen song, Quiet Please, There's a Lady on Stage.

Stern said, "He starts singing it quietly and part of the song is clap your hands together. He made everyone get up and start clapping their hands to the song. I was so f**king moved by this guys performance. I had tears. Now, you know me. I'm a big scumbag. I don't get moved. I appreciated this guy so much. Hugh Jackman. You know f**king Wolverine."