Hope Of The States - Sing It Out Video 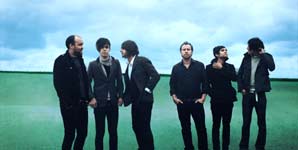 Artist: Hope Of The States
Song title: Sing It Out

Hope Of The States
Sing It Out
Video Stream

Hope Of The States will release a new single 'Sing It Out' on 5th June through Columbia Records; the first single proper to be taken from 'Left', their sophomore album which follows on June 19th.

'Sing It Out' is a stomping and rousing anthem, a call to the weary, the wild and the wise that not only alludes towards the new dynamic sonic progression that is set to redefine and reinforce their position as a British tour de force in 2006 but also helps to realise the band's ambition of making 'Left' a far more 'up' record than it's predecessor; their massively acclaimed debut 'The Lost Riots'. As the fire burns inside the song, and the sound ascends new levels of intensity; the future looks decidedly bright for Hope Of The States.

Hope Of The States are currently in the midst of a fully sold out low-key tour of the UK which has seen them triumphantly debuting and previewing material from their brand new album 'Left' in a more intimate environment, following on from their last hugely successful headline tour of the UK which saw the band play to an audience of 40,000 fans. These remaining dates should not be missed at any cost.

'Sing It Out' comes hot on the heels of the already sold-out vinyl only 'Blood Meridian EP' released earlier this month to rave reviews including single of the week in the NME/Track of the month in the Fly. Sing It Out will be available on enhanced CD and 2 X 7" singles featuring exclusive new tracks 'Morning Ghosts', 'My Son The Crow', 'A Rek' and 'Hum' spread across all formats; the CD will also include the video.

Hope Of The States, Sing It... 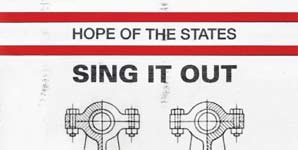 Hope Of The States - Sing It Out

Hope Of The States, Sing It Out, Video Stream Video