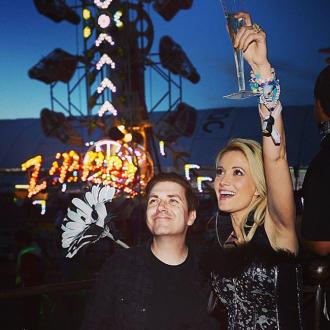 The former Playboy model - who has six-month-old daughter Rainbow Aurora with the businessman - wed at the family-friendly attraction in Anaheim, California, when the park was closed to the public following a three-month engagement.

Holly's spokesperson confirmed to UsMagazine.com: ''Entertainer/model/producer Holly Madison exchanged vows with CEO and founder of Insomniac Events Pasquale Rotella on Tuesday, September 10th, at 10:40pm. Their six-month-old daughter Rainbow was the surprise guest of honour. The wedding was held inside Disneyland Resort in Anaheim, California. This is the first marriage for both.''

The newlyweds - who met at the end of 2011 - tied the knot just outside the entrance of the attraction's 'Pirates of the Caribbean' ride, located in New Orleans Square, and had the whole venue to themselves.

Holly and her entrepreneur beau waited until the last minute to obtain their marriage licence on Monday (09.09.13), just 24 hours before their nuptials.

The 33-year-old beauty - the former live-in girlfriend of Hugh Hefner - wrote on her official blog: ''We did it! Last wedding prep item taken off the checklist-we went and got our marriage licence this morning!''

The couple got engaged in June, three months after the birth of their daughter Rainbow Aurora, when Pasquale proposed to Holly at the top of a Ferris wheel in Las Vegas.

Holly shot to fame along in 2005 with Kendra Wilkinson and Bridget Marquardt as one of the Playboy mogul's live-in girlfriends on reality show 'The Girls Next Door'. She later starred in spin-off show, 'Holly's World'.