It was with a sense of trepidation that the first steps into Nottingham's first annual Hit The Deck festival, a heavily sponsored all-day indoor festival focused on the genres of metal, rock, emo and hardcore (both post and present), were made. Side-stepping the scores of already half-comatose late teens sprawling onto the roads and tram-line outside it was hard to leave the comforts of the first day of the year to offer a taste of summer and head into the barely-lit confines of the Nottingham Rock City/Rescue Rooms/Stealth complex in the middle of a glorious Sunday afternoon. 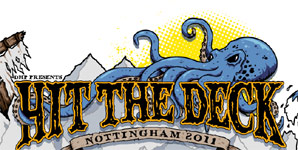 As it turned out, events had commenced only slightly after noon, and so apologies to Against The Flood, Evarose and any other band who were playing whilst more sensible people were still eating breakfast. James Cleaver Quartet kick off proceedings for Contactmusic.com, and their angular hardcore is an energetic if slightly unimaginative introduction to the event. They are slightly less polished than a lot of the bands that follow them, but if anything this is a compliment.

Hyro Da Hero is the day's biggest curveball, which admittedly does not mean it strays too far away from the rest of the line-up. Backed by an impressive backing band featuring members of Idiot Pilot, At The Drive In and Blood Brothers his intelligent and visceral raps are given an intriguing background, and whilst certain moments veer dangerously close to rap-metal there are enough ideas throughout to keep things sounding fresh. At his most accusatory and confrontational he often mirrors Rage Against The Machine front-man Zach De La Rocha, but behind the scenes things are much fresher, with the bubbling soundscapes of songs like 'Glimpses Into New America' meshing together elements from their creators former bands, if in a generally more restrained manner.

One pleasant surprise throughout the event is the atmosphere. High temperatures and higher quantities of cheap alcohol consumed by a largely teenage crowd in a sold-out indoor festival featuring a line-up of aggressive alternative music seems like a recipe for disaster, but the audience is surprisingly passive and appreciative throughout, with no indications of violence or stupidity. Even the various mosh-pits that stir up occasionally seem more harmonious than usual.

Particularly during the set of Norwegian sextet Kvelertak, one of the more hotly tipped bands outside of the events sponsors. Their self-styled mixture of black-metal and punk is perfectly suited to the event and is one of the strongest sets of the day, with the band staying just the right side of theatrical in their multi-pronged attack. Whilst they may have been one of few bands on the line-ups undercard to pull off a set at the main room of Rock City, the Rescue Rooms is much better suited to them.

Later on, Cancer Bats and The Blackout offer two of the most anticipated sets, and both please the audiences without stepping into another gear. There are surprisingly few signs of fatigue across the crowd, with the core remaining as appreciative as ever, with the formers straight-up guttural hardcore whipping the Rescue Rooms into a veritable frenzy and the latter's melodic post-hardcore filling the main room of Rock City with ease.

Whilst it's easy to baulk at the 'alternative commercialism' present throughout the festival to the extent that each stage is sponsored and be put off by the festivals general reluctance to test any boundaries Hit The Deck makes the most out of a niche and it provided a day surprisingly bereft of violence and chaos. 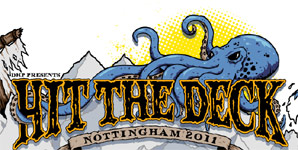