Hilary Swank was left with no clothes to wear ahead of a Super Bowl charity event after she lost her luggage at a Dallas airport at the weekend. 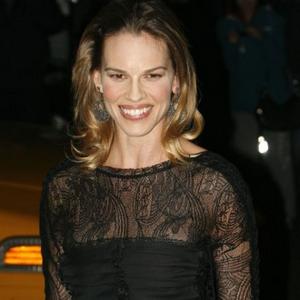 Hilary Swank lost her luggage ahead of a Super Bowl charity event at the weekend.

The Oscar-winning actress was left without any clothes to wear after staff misplaced her bags when she flew into Dallas to host the Big Game Big Give party held by restaurateur Phil Romano - who founded Eatzi's, Macaroni Grill and Fuddrucker's - in the Texan city.

But rather than let her baggage woes get her down, quick-thinking Hilary decided to buy a T-shirt from the airport gift shop which was emblazoned with the message "Don't Mess With Texas" to wear to the benefit.

The event took place at Romano's five-acre estate on Strait Lane and featured a gourmet Texas-style barbeque for the 350 guests in attendance.

The party was held to raise money for the Giving Back Fund - which aims to bring together celebrities and sports people to help their communities - and Hunger Busters, Romano's non-profit organisation that provides hot meals to homeless people in Dallas.

The Super Bowl game between the Green Bay Packers and the Pittsburgh Steelers was held at the Cowboys Stadium in Arlington, Texas on Sunday (07.02.11).