Singer and actress says their life together has so much more purpose now. 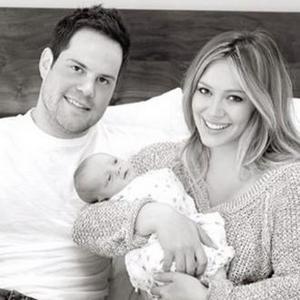 Hilary Duff thinks having her 10-week-old child Luca Cruz with ex-NHL player MIKE COMRIE has made their marriage even stronger.

She told Hollyscoop: ''It's made [our marriage] stronger. Having a baby is a lot of hard work and you really depend on each other for a lot. There is so much love...you can't imagine it until it happens to you and you look at your husband and you're like 'we did this together.'

She continued: ''[There's] lots of hard work, [but] its fantastic. [Having a child] has just done so much for our family. Mike and I were married before and that's a great feeling but to really have a child and feel that connection, that unit, it really has been an incredible Journey.''

While she has shared images of the baby on twitter Hilary revealed selling images for a hefty sum would not have been the right choice for their Offspring.

She added: ''I understand why people sell photos and hopefully give the money to charities, we got those offers too and I just didn't want to do that.

''This is our child and we really wanted to start off protecting him. I tweeted pictures of him and showed him to the world in that way, we are trying to give him the best chance to have a normal start.''