Heavy rockers HELLYEAH have scrapped a show in Holland after singer CHAD GRAY was forced to fly back to his native America "due to a family emergency".
The band was due to play a show in Amsterdam on Thursday night (03Jun10), but the concert has now been called off to allow the frontman to travel home. No further details about the emergency were given, but a statement posted on the group's official website insists Gray should be back to continue the rest of their scheduled shows in Europe.
The statement reads, "We, unfortunately, have to cancel our show at Melkweg in Amsterdam tonight (June 3) due to a family emergency Chad had to fly back home for. We apologise to our fans in Amsterdam, and the rest of the band are trying to find a place where you fans can come by and party with us (on) Thursday night. Chad anticipates making it out for the rest of our scheduled shows." 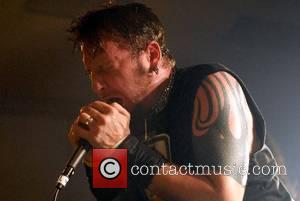