Helena Bonham Carter described her partner Tim Burton is her ''hero'' when the pair attended the UK premiere of their new movie 'Dark Shadows' in London last night (09.05.12). 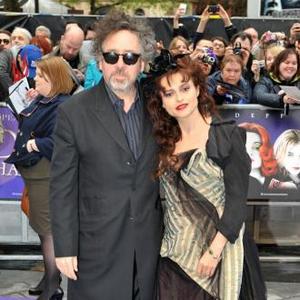 The actress collaborated with the director once again on new movie 'Dark Shadows' and Helena insists she has the utmost respect for Tim - with whom she has two children, Billy, eight, and four-year-old Nell.

When asked if she had a behind-the-scenes hero while shooting the vampire movie, she laughed to BANG Showbiz: ''My boyfriend ... Tim Burton!''

The 45-year-old actress and Tim, 53, walked a special purple carpet together at the UK premiere of 'Dark Shadows' at the Empire Cinema in London's Leicester Square last night (09.05.12).

Helena stars alongside Johnny Depp in the dark comic remake of The Cult 60s TV series, and the British star revealed she was keen to land a role in the film because wanted to see Johnny with fangs.

She said: ''It was really fun to make! I love all the teeth. I've always been into teeth, the whole vampire teeth and Johnny had these special teeth that were really fun.''