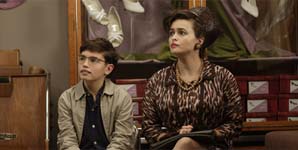 Helena Bonham Carter has left behind the image of her earliest roles, cast in high quality period pieces such as A Room With A View, Lady Jane and Howard's End. One of Britain's most versatile actresses, she has appeared in a variety of different films lately, providing voices for characters in Corpse Bride for her partner Tim Burton, and Wallace & Gromit - Curse of the Were-Rabbit. She has also taken on challenging roles in Big Fish, The Heart of Me, Fight Cub, Novocaine, Wings of the Dove and Frankenstein.

A touching, comical tale of the bonds of family, Sixty Six is a Working Title production inspired - in part - by the personal experience of director Paul Weiland.
Helena Bonham Carter plays Esther, mother to 12 year old Bernie (Gregg Sulkin) and his older brother Alvie (Ben Newton). As Bernie prepares in earnest for a Bar Mitzvah to end them all Esther is distracted by the business problems her hapless husband Manny (Eddie Marsan) is experiencing. At the same time Bernie realises with horror that the World Cup Finals fall upon his big day, July 30 1966. In the unlikely event of England going all the way he fears attendance for his celebration will be disastrously low.

As it was the year of your birth you presumably don't have many memories of 1966, do you?

"I can't really remember much about that year to be honest, because I was born in the May. But it was a pretty good education doing the film - and it's all a bit tragic that that's the last time we won the World Cup. But it's true, I do claim a certain ownership of the year, having been born in it."

So how did you get involved in the film?

"I was at the fateful 50th birthday party that Paul Weiland held, when he gave one of the funniest speeches I'd ever heard. This was about how the only other party he'd really had in his life was a complete disaster because no-one came to it - and that turned out to be the basic idea of the film. Half the people from Working Title were there, so if he'd intended it as a pitch he'd planned it perfectly."

The part you play was inspired by Paul's own mother, wasn't she?

"Yes, and I was introduced to his Mum, Esther, that night. She's an amazing woman, I did pretty much base it on her, although ultimately the story couldn't have been completely faithful to reality. There was a certain amount of privacy we obviously had to respect."

And how did you feel about your screen husband, Eddie Marsan?

"He's such a good actor, it was very easy working with him, we had a lot of laughs. And he had brown contact lenses in for this, he has very blue eyes, and they completely changed him, these panda-like eyes evoke great sympathy."

When you two are sharing a scene with your screen in-laws, Peter Serafinowicz and Catherine Tate - both known for their comedy work - does it become a raucous affair with you trying not to laugh?

"Well that's the fantastic thing, Catherine's very staid actually, very straight. She's very quiet, probably because she's doing loads of different things at the same time. And Peter was so nice, there was a really great group of people. And we did have a laugh. Paul Weiland is very funny, so it was a problem not laughing. There was one scene that we just could not get through, for some reason. You think it's hysterical on the day and then you watch it and wonder what on Earth is so funny. It's when the doctor and his wife [Stephen Rea and Geraldine Somerville] come to tea, and Eddie's going on about his war experience, how traumatic it was. It's when Geraldine asks if he was a pilot and he says he was a cook. She could not get that word out, everyone was corpsing, it was painful."

"He had zero experience but he was really good. The irony is, given the fact that the character can't play very well, is that he's actually a brilliant footballer. He can really do anything but he's so modest with it. He's so unaware of all his gifts, but first and foremost he's got such nice manners and he's so enthusiastic, a genuinely sweet child who's been very well brought up."

What of your work had he seen?

"I don't know, but apparently he was terrified of me. Me of all people! I don't know what made scared him."

It could be a number of things, so diverse have been your roles in recent years?

"My choice is more to do with my character I think, because I do like dressing up and changing and exploring different kinds of characters. And in a way covering myself. But the thing is ultimately you're just doing what's on offer. And what's good writing. I did this partly because of Paul but also because I loved the script and the story."

Given your early exposure in a succession of fine period films, would you shy away from doing those in the future or are you open to offers?

"I would, but I don't think I'll be offered them to be honest. There are millions of other actresses out there and, you know, I'm 40. It's time for the younger generation to have a go."

You're certainly busy, what with your son, and an upcoming role in the new Harry Potter film......

Which you were inspired to do when you were pregnant. Has it occurred to you that a lot of good things happened at that time, including your attending that fateful birthday party for Paul Weiland?

"I also did a film called Conversations With Other Women, that was shot in 13 days - I like films that are shot in 13 days. That was fantastic. The only problem with doing films is that there's a hell of a lot of waiting. But on that it was act-act-act, and no waiting. That was pretty good. That's the problem, often weirdly the tinier the budget the better the writing. And you're definitely better if the writing's good. I hope that one gets seen. But there's tons of work that you do in your career, or life, which never really gets seen. You get know for certain things, but that's just five per cent of what you'd done. But you're right, there has been a lot happening, and a lot of it is definitely transformed by Billy arriving. I just won't go off and do anything now."

You would presumably agree, though, that being a parent real changes the way you approach playing a mum like Esther in Sixty Six?

Sixty Six is released at cinemas everywhere November 3, Cert 12A