Dame Helen Mirren thinks marrying later in life ''is a very good idea'' and is happy she waited until she was 52 before tying the knot with Taylor Hackford. 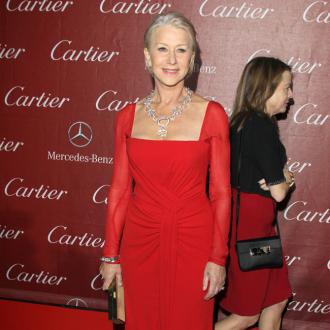 The Oscar winning-actress, 70, is glad she waited until she was 52 years old before marrying Taylor Hackford in 1997 after 11 years of dating, and believes many young women rush down the aisle because they ''have a princess complex.''

She said: ''I think marrying late is a very good idea - it worked out for me. In general, I'd say it's not a great idea to marry young. And it's a really terrible idea to get married for the frock.

''I was lucky because I'd worn so many incredible dresses as costumes. But girls nowadays have a princess complex - they're longing to have the gorgeous dress, be the centre of attention and live the dream for 24 hours.''

The 'Trumbo' star also says it is very important for women to maintain their independence.

She said: ''At 70 years old, if I could give my younger self one piece of advice, it would be to use the words 'f*** off' much more frequently.

''It annoys me when I see men with an arm slung round their girlfriend's shoulders. It's like ownership. Of course, when you're young, you want the guy to take your hand and look after you. But when I see girls being leaned on, I want to say, 'Tell him to get his damned arm off your shoulder.' ''

Meanwhile, Helen, who has no children of her own, claims she has ''no idea'' what Taylor's adult sons from previous relationships, Rio and Alexander, or his grandchildren think of her.

She told the Daily Mail's You magazine: ''I honestly don't know what the children think of me - because I come and go in their lives. I'm not baking them cookies on weekends! I waft in and out, and I think they understand that I'm not the normal sort of grandmother.

''All I'd say to them is that aging is an adventure. It's a frightening adventure because health becomes an issue.