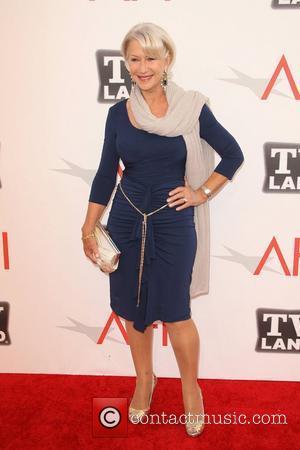 Dame Helen Mirren has ignored calls to drop out of an upcoming biopic about disgraced music mogul Phil Spector.
The veteran British actress prompted outrage among friends of Spector's victim, murdered actress Lana Clarkson, after signing up to play the famed producer's attorney, Linda Kenny Braden. She stepped in to replace an injured Bette Midler in the role.
The Friends of Lana Clarkson campaigners sent a letter to warn Mirren she faces "serious consequences" if she doesn't quit the controversial film, which they fear will portray Spector in a sympathetic light.
The group's spokesperson, Edward Lozzi, tells Britain's Mail on Sunday, "We have great respect for Helen Mirren. What we hope is that when she reads this script and sees Lana is being trashed, she will speak up and say, 'This is not right.'
"Helen Mirren probably didn't know about The Friends of Lana Clarkson when she agreed to take the role - it would have been just another job to her. But now that she is aware, we ask her to examine her conscience."
A representative confirms that The Queen star has received the letter but refuses to walk away from the project.
The spokesperson explains, "She's in the movie. She's not dropping out. That's all she's saying."
Al Pacino has begun filming his role as Spector in the HBO movie, which will chronicle the record producer's first trial for the 2003 shooting of actress Lana Clarkson at his home. The case resulted in a mistrial in 2007, but in 2009, a second trial ended with a conviction and a 19-year prison sentence for Spector.