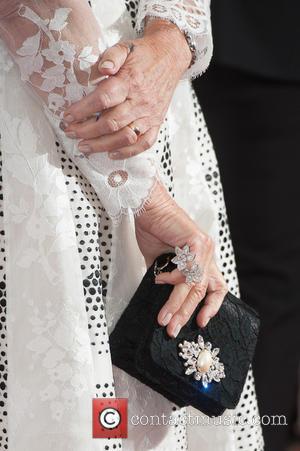 Dame Helen Mirren was feted with the coveted Icon honour at the Glamour Women of the Year Awards on Tuesday (03Jun14).

The 11th annual prizegiving at London's Berkeley Square Gardens brought out a slew of stars, but it was the 68-year-old Oscar winner who stole the show.

Mirren was presented the Icon prize by Ryan Reynolds, her current co-star in upcoming film Woman in Gold.

Reynolds dubbed her the "Dame of Thrones", and joked about the beloved actress, stating "For most actors, painstaking preparation involves nothing more than spray tan and a big pile of coke. But this next honouree has shown me that those things just aren't as important as I'd previously thought."

He continued, "The term 'national treasure' is bandied around a lot but, in the case of this stage and screen legend, it's absolutely deserved. She brings grace and fierce talent to her roles and leaves a trail of critical acclaim in her wake. She's also someone we're absolutely desperate to get drunk with at a party."

Upon receiving the honour, Mirren said, "There are a lot of really young women here who are very beautiful, incredibly talented, and I salute you and respect you all. I'm so proud to be a member of your sex."