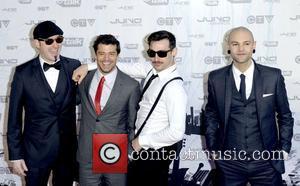 The quartet went into the Canadian music video network's annual prizegiving with six nominations and landed three wins thanks to their cheeky promo for hit song Anything.

Toronto-born rapper Drake was unable to attend the ceremony in his hometown, but still won Hip-Hop Video of the Year (Worst Behavior) and International Video Of The Year By A Canadian (Hold On, We're Going Home).

Another hometown boy, Justin Bieber, took the Favourite Artist or Group prize for the fourth year in a row, but was not present to accept his award. Meanwhile, his ex-girlfriend Selena Gomez scooped Favourite International Artist or Group, and thanked all her fans in a pre-taped video message, noting that Canada is one of her "favourite countries in the world".

Reality Tv stars Kendall and Kylie Jenner served as co-hosts for the ceremony, and Kendall kicked off the night by poking fun at herself after she stumbled over her words as she introduced the nominees for International Video of the Year, much like she did at the Billboard Music Awards in May (14).

Hedley - Kiss You Inside Out (Version Francaise) Video