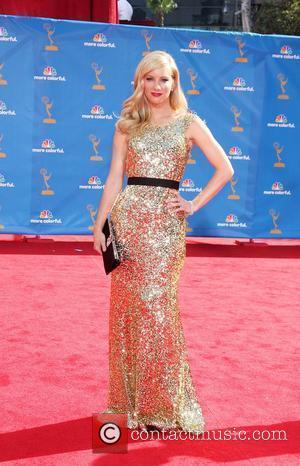 Heather Morris performed one of Britney Spears hit songs in an episode of Glee, on Tuesday (28th 2010) and she did it whilst dancing with a snake, reports MTV News. Morris, who plays the cheerleader 'Brittany S Pierce' in the hit US show, performed a rendition of 'I'm A Slave 4 You' whilst holding a snake around her neck, recreating the performance that Spears gave at the MTV Video Music Awards in 2001.
During one of the anaesthesia induced dream sequences, Morris' character revealed "My name is also Britney Spears. Brittany S. Pierce. I've lived my entire life in Britney Spears' shadow", and the episode saw the 'Toxic' superstar make a small cameo appearance. 23-year-old Morris seemingly impresses the pop princess with her performance, as Spears used her Twitter page to compliment the actress, saying, "Awww Heather Morris is sooo cute! Brittany S Pearce. Ha! She was so fun to work with and was really sweet in person".
The episode, which recorded viewing figures of 13.5 million, also featured Lea Michele'S character 'Rachel' tackling one of Britney's earliest songs, 'Hit Me Baby One More Time'.