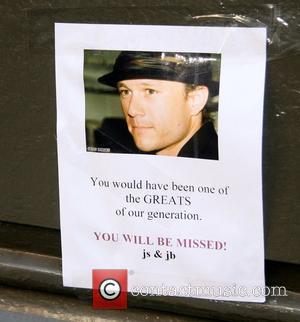 Picture: Following the death of Heath Ledger at age 28 yesterday, fans and admirers have set up a memorial for the actor in front of his...

Not one but three actors have been signed up to take over the late Heath Ledger's role in Terry Gilliam's THE IMAGINARIUM OF DR PARNASSUS, according to new reports.

Ain'tItCool.com claims that Johnny Depp, Colin Farrell and Jude Law will all play Ledger's character with the dramatic changes of appearance being attributed to the fantastical nature of the movie.

Ledger was working on the project up until his death in January.

The actor, who was known for his roles in Brokeback Mountain and A KNIGHT'S TALE, played a man attempting to save the young daughter of a travelling showman who sold her soul to the devil in exchange for eternal youth.

Earlier reports had suggested that the movie would be completed using stills and CGI technology.

The PETITE ACTRESS told Hollyscoop that the actor is "beautiful" and that if her dream did come true, she would probably be "too nervous" to talk to him.