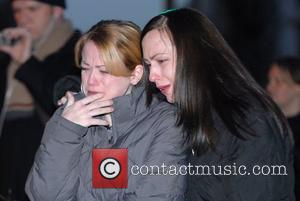 Picture: Days after Heath Ledger's death, fans continue to leave artwork and letters in honour of his life and career in film New York City, USA...

Family and friends of the late Heath Ledger, including his ex-girlfriend Naomi Watts, have gathered at a memorial service for the actor.

Watts and Ledger's ex-fiancee Michelle Williams were among the mourners at the private service at the Pierce Brothers Westwood Village Memorial Park and Mortuary in Los Angeles after the Brokeback Mountain star's body was flown from New York City.

The 28-year-old was found dead in his downtown Manhattan apartment last Tuesday with an autopsy proving inconclusive as to the cause of death.

Though it was reported that prescription drugs were found in the SoHo bedroom, it has since been reported that the actor's death may have been a result of natural causes.

According to celebrity web site TMZ.com, sources "intimately connected with the investigation" have said Ledger may have died from a heart attack.

"It's now appearing that the level of toxicity (from medication) in Ledger's system was low enough that it may not have caused his death. These sources say Heath's heart stopped," the website reported.

Some 1,000 guests at the G'Day USA Australia Day Ball at the Waldorf Astoria Hotel in New York City held a minute's silence in honour of the Perth-born actor on Saturday night.

According to Melbourne newspaper The Age, the Australian consul-general also read a letter written by the late actor's father Kim.

"Heath did not become an actor for the fame or fortune," he wrote. "He loved his craft and he loved helping his friends. He loved chess and skateboarding too."

The letter added: "My image of Heath in New York is him with his skateboard, a canvas bag and his beanie.

"That was Heath to me... Heath is and always will be an Australian."