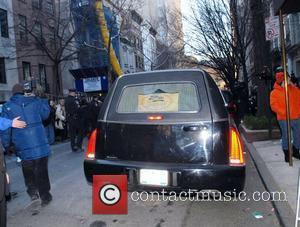 Picture: The casket of actor Heath Ledger is taken out of The Frank Campbell Funeral Home on Madison Avenue New York City, USA - 25.01.08

Heath Ledger's Brokeback Mountain co-star Kate Mara has spoken of her grief following the actor's untimely death last week (22Jan08). Mara played Ledger's onscreen daughter in the latter stages of the movie - when her character Alma Jr. was aged 19 - and formed a close friendship with the tragic star on-set. Speaking at an AIDS charity gala on Thursday (31Jan08), Mara, 24, said, "I got the chance to spend some time with him, and he talked a lot about his family, because I have the same name as his sister. "It is so sad, and I just hope his family are given the chance to grieve." Ledger was found dead in his New York apartment on 22 January (08). An autopsy failed to reveal how he died, although police believe his death could be drug-related as five different bottles of prescription drugs were found around his apartment.