Returning after a three year gap, Ohio's Heartless B***ards have attempted to evolve their sound to a much greater extent than before, as singer, Erika Wennerstrom, believes repetition stifles creativity. Their ten track opus, entitled 'Restless Ones', executes manifesto with mixed results. 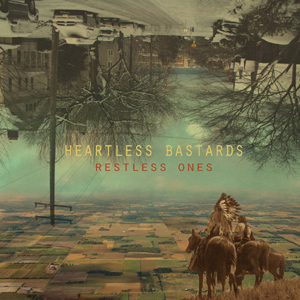 It begins promisingly, with the gorgeously layered 'Wind up Bird', recalling the nerdish charm of Weezer and Semisonic in their late-nineties pomp. The high level is maintained for the following two songs, 'Gates of Dawn' and the powerful 'Black Cloud'.

From here on in, however, 'Restless Ones' begins to fizzle out, feeling underdeveloped and offering nothing more than background music while doing the ironing.  'Journey' is clichéd middle of the road canter, lacking a seismic emotional punch and is indicative of the dreary pace that infiltrates two thirds of this record. Elegiac ballad 'Pocket Full of Thirst' offers a semblance of potential for the slower material, but by the final track, 'Tristessa', the early trident of playful, soulful garage, bluesy rock has been dwarfed by a maelstrom of insipid nothingness.