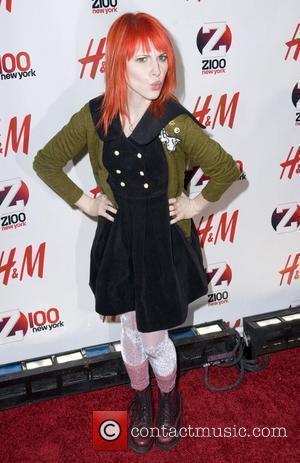 Hayley Williams has slammed reports Paramore are heading for a split following the departure of bandmembers JOSH and ZAC FARRO, insisting the group is "not going anywhere".
The Farro siblings left last month (Dec10) and accused Williams of taking over and causing tensions within the band. Paramore has now temporarily drafted in A Perfect Circle star John Freese and Justin York to take their places.
The departures sparked speculation Paramore's future is in doubt, but Williams has brushed off the reports, telling MTV News, "There's been a lot of things said online, especially in the past week, and it sucks... It sucks to read it, and it also sucks to know that responding isn't really going to help online, because things travel so terribly on the internet.
"So we really wanted the opportunity to show our fans that we're okay, you know? The three of us are still here, we're not going anywhere. A lot of kids are still asking if the band is breaking up, and that just goes to show how broken the communication online can be, when rumours start travelling. So this is our way of showing that there's a future and we're stoked for it."
And the frontwoman has opened up about the Farros, insisting she's upset it didn't work out: "I don't know if I got a phone call or an email, but I woke up to it, basically, and that sucked, and I was not happy. And yeah, it hurts, because what we were told was that they weren't happy, they didn't want to do this, and you can't be mad at someone for not feeling something. But then when it really became about all these other things, I was very surprised and kind of felt led on, almost. We've been doing this for six, seven years now. I don't think any of this has been in vain, for any of us... and I don't think anyone should discredit it."