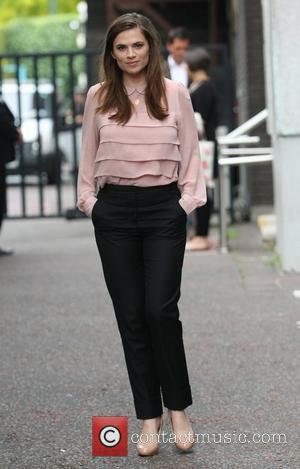 Dominic Cooper has threatened to shame Hayley Atwell by releasing saucy joke footage they filmed between takes on the set of Captain America: The First Avenger.
The British actress and her co-stars made their own version of superhero porn to amuse themselves while waiting for the cameras to roll.
But Atwell, who plays Captain America's love interest in the blockbuster, is terrified Cooper will embarrass her by uploading the racy footage online.
She tells Nylon magazine, "We got up to a lot of mischief on set. There was a lot of waiting around, so he'd get out his iPhone and make videos of the characters when they think they're not being watched. Like (my character) Peggy Carter giving Captain America a b**wjob in the cockpit of the plane.
"I spoke to Dominic yesterday and he threatened to put the video on YouTube."