Hayley Atwell is hoping to reprise her role as Peggy Carter in a 'Captain America' sequel, prequel of in 'The Avengers'. 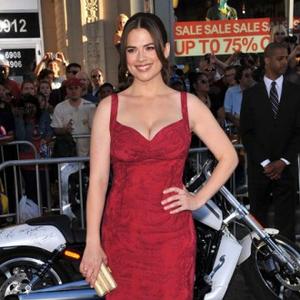 Hayley Atwell would love to play her 'Captain America: The First Avenger' character in 'The Avengers'.

The British star plays the titular character's love interest Peggy Carter in the big screen adaptation of the Marvel comic set in the 1940s and while the super soldier is preserved in a deep sleep for 70 years before being awakened in 'The Avengers', Hayley thinks a "bittersweet" meeting between the former couple would be a great addition to the movie.

She said: "I would love to play my character in old age. It would be so bittersweet, can you imagine meeting your first love all those years later and you've aged and they haven't. I haven't been privy to what's going on, I'm contracted to be involved as they see fit so hopefully I'll get a call."

Hayley would also relish the opportunity to play Peggy in a prequel because she loved the physical challenges faced by her character as an American agent serving with the French Resistance.

She explained to Collider.com: "I'd love to play her again, she's such a strong character and so capable. There were a lot more stunts that I did that didn't make it into the film, there's so much more I would love to do to challenge myself, action, stunts, beating people up."